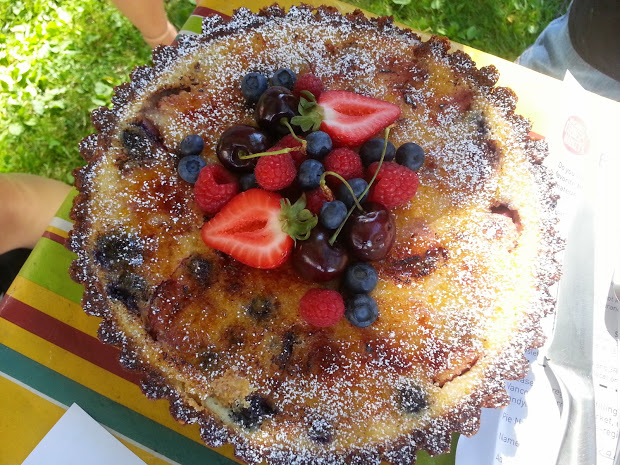 This pie looks amazing, has a flavourful crust and the brulee puts it absolutely over the top (Photo Courtesy of one of last year’s judges, Cassandra Anderton of Goodlife Vancouver).  It was submitted by Shelley of The Last Crumb Bakery to last year’s BC Berry Pie Bake Off and won first prize! Try picking up some berries at this week’s farmers markets and making it at home:

Combine the walnuts and the graham cracker crumbs in the bowl of a food processor and pulse until the walnuts are the size of oat flakes. Add the golden yellow sugar, salt and cinnamon and pulse to combine. Add the honey and the melted butter and pulse to moisten the crumbs.

Pour the mixture into a 10″ pie plate or a 9″ fluted deep dish tart pan with a removable bottom. Press the mixture into the bottom and sides of pan; making sure to evenly distribute the crumbs. Bake for 10 minutes at 350 degrees. Allow to cool completely. Melt some white chocolate in the microwave and brush over the sides and bottom of crust to create a moisture barrier for the custard. Set aside.

Combine eggs and sugar and beat until the mixture is thick and very light-coloured using a stand or hand mixer. Beat in flour, buttermilk, cinnamon, vanilla, and melted butter. Add the berries to the empty crust. Pour the custard into the waiting shell and give it a stir to distribute the berries. Bake at 350 degrees for 30-40 minutes or until the custard is set in the centre but still a little wobbly.

Set the pie aside and allow to cool completely. Refrigerate the pie overnight to set completely. Before serving, sprinkle the top of the pie evenly with coarse sugar. Using a small blowtorch or the preheated broiler in your oven, melt the sugar until it caramelizes. Be very careful to watch the sugar if it is in the broiler, once it starts to caramelize it will go quickly and can burn instead.Enjoy!

Shelley will be joining us at the Mt Pleasant Farmers Market this Sunday to judge more than 11 pies and to crown the new champion! Come check it out and sample the winning pies. Judging is between 12pm-1pm, winner announced at 1:30pm and pie slices available for donation immediately following!